The all you can eat buffet is morality’s out-of-office reply.  It’s unbridled quantity over quantity and rewards both low standards and the inability to make decisions.  Thankfylly, as the world becomes more connected, healthier and woke, the AYCEB (I’m not typing those words 40 more times) trends further downward into obsolescence. It’s not entirely shocking that as online review platforms such as Yelp and TripAdvisor grew in size the buffet-industrial complex took a complete nose dive.  In fact, Buffets Inc., the company responsible for Old Country Buffet and a commitment to never having anyone ask the question “what do they do?”, filed for bankruptcy THREE TIMES in the last decade. Openings are at an all-time low and no one seems to be asking for new ones.

Why do people go to AYCEB? There are so many red flags.  Just from an ethical standpoint, the amount of food waste associated with AYCEB’s, which some studies estimated to be as high as 50%, should make them a non-starter.  But then again, there’s nothing more American than creating an industry that found a way to temporarily profit off of poor people gorging themselves on cheap plastic food while miraculously wasting half of it and then getting the government to cancel their debt when it doesn’t work out…three times.

Don’t get me wrong, I’ve been to plenty.  Chinese buffets were unsurprisingly a staple of my fat childhood and the discovery of places like Kumo Sushi, where you can have endless sushi, sake and beer for like $45, help keep me in a full B cup till this day.  That doesn’t mean I walk away from these experiences ever feeling good.

Part of  buffets allure is that they compound the glamour of endless choice with the reality of their customers finances.  It’s immersive theater. The central conceit is that all involved parties have the means to choose whatever they like, and, as a function of their choices, reject endless quantities of perfectly fine food like a redneck Marie Antoinette. It’s a special occasion for the working poor where you can briefly escape the realities of your financial obligations and over indulge in the perceived luxury of bottomless Purina grade crab legs.

From a strictly gastronomic standpoint, AYCE buffets are usually a mish-mosh of cuisines with no coherent narrative. The endless options and choices give you the ability to create your very own death row meal. You can have plates of ravioli and meatloaf; pizza and green beans; “Prime Rib” and just the skin from three fried chicken thighs.  You can even just have a personal basket of dinner rolls or a medley of ice cream toppings with no actual ice cream. These edible non sequiturs are typically reserved for the brief hours of life spent not being electrocuted just before god sweeps you up into his trash bin at the big Golden Corral in the sky – but for you its just $11.99

From a public health perspective AYCEB’s are a huge liability, as they are literally the perfect breeding ground for a multitude of bacteria and viruses.  Most buffet illnesses are from what has been coined “Fried Rice Syndrome”, the wild multi-directional water shits you get from ingesting a nasty little strain of bacteria that can withstand being fried and loves warm food.

It can get much worse. In fact, the worst hepatitis outbreak in US history came from your friendly neighborhood buffet. And not the cool Hep C you get from prison tattoos and fucking Pamela Anderson, the shitty Hep A you get from bad green onions at the taco bar. Chi-Chi’s, a defunct Tex-Mex buffet that still makes amazing tortilla chips you can occasionally buy at Shop-Rite, once gave 660 people hepatitis, eventually killing four of them.  Still get the chips though.

It’s because of all of these shortcomings that I love K-POT, which just opened in Colony Plaza, by 99 Ranch. 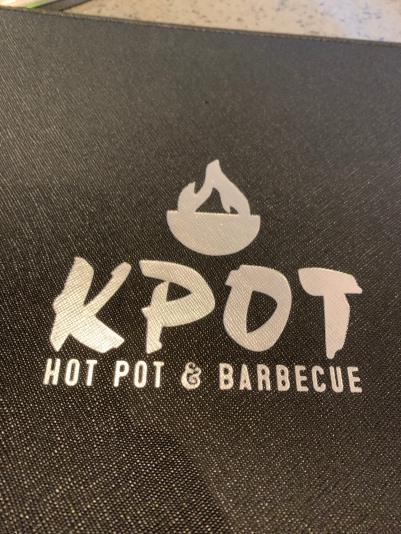 First, K-POT is all you can eat, but it’s not a buffet.  You order off a menu and your bounty is presented to you just like it would be at a big boy restaurant and if you gratuitously over order they will charge you – both of which control for food waste.  They have a 90 minute policy, but I don’t think you’ll need any more than that. They also seem pretty relaxed on this, just don’t abuse it.

There’s also a robust sauce station where you can get your standards, like hoisin and soy sauce, as well as basic aromatics, like garlic, ginger and scallions (hepatitis unconfirmed).  You can also get funkier stuff like doenjang, a Korean fermented bean paste which should be on the radar of anyone who consumes a decent amount of grilled meat (use this – don’t add sugar/honey).

Much like the AYCBE It combines multiple cuisines, in this case Korean BBQ and Chinese hot pot. Unlike them, there is a uniting principle that works, even if it celebrates DIY cooking more than the food itself. 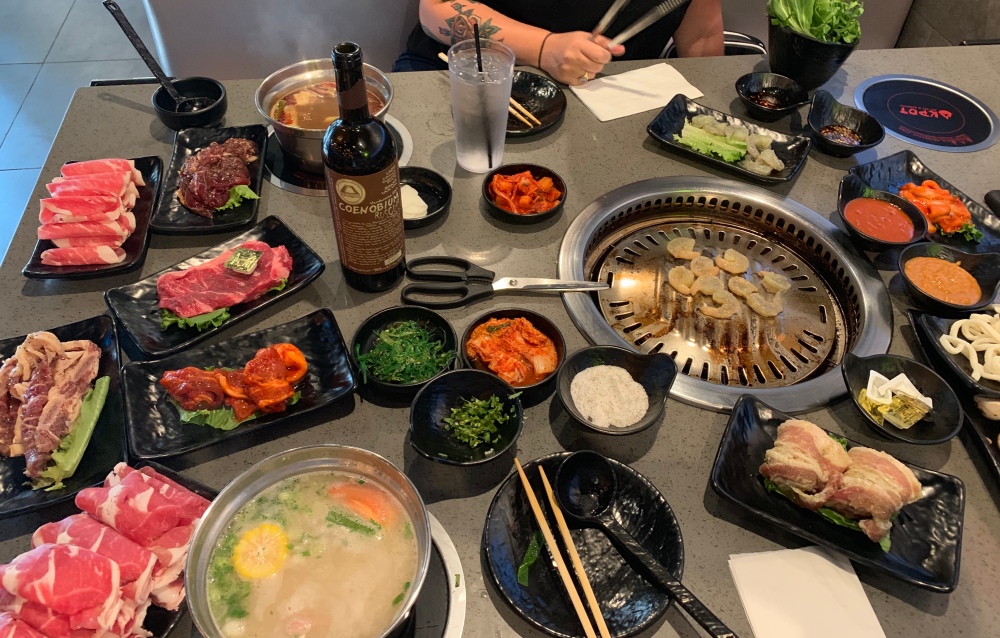 As far as anything all you can eat goes, a $27 entry fee is pretty steep.  If you’ve made it this far in the article you can probably put the pieces together on why AYCEB’s are able to keep their prices low.  I’m not sure that you’re getting the best quality ingredients here either, but they’re not bad, and the fact that they’re stored properly in a kitchen and not displayed publicly for every unvaccinated child to poke at is reassuring.

If you had to choose one here, the winner is by far the hot pot.

For those unfamiliar, Hot pot is a type of communal dining experience popularized in China where you cook raw ingredients in a bubbling cauldron of flavored broth.  You can choose different bases, at K-POT there are 6, and allows almost endless customization (see: sauce bar). Each base imparts the dominant flavor of the broth into the meat and vice versa after enough fatty meats have been thrown in the boil.

I tried their Sichuan blend – very spicy and instantly made my ass sweat – and the house blend, which was really good but needed the help of garlic, scallion and a scoop of the Sichuan broth.  You can cook various cuts of meat, veggies and carbs. You can also get different dumplings and balls to throw in there, which are fine but not better than having the same thing cooked literally any other way. Build it however you’d like.

The KBBQ is underwhelming in comparison, but still perfectly fine.  The options are actually really solid. Just about everything you can think of is on there, but the stand outs were the garlic shrimp, beef bulgogi, and the K-POT steak, which is an actual big ass steak they give you to cook.  You’ll want to get veggies to try and be healthy but it’s just not worth it. Have a salad for lunch.

Unlike many solid KBBQ spots or Japanese BBQ places like Gyu Kaku, the actual cooking apparatus of K-POT completely fails everyone involved.  Instead of cast iron or non-stick they use what looks like a new stainless steel hub cap as a grill. Almost every piece of meat thrown on the grill clung to the surface, regardless of doneness, and left substantial bits of meat left to burn.  I felt like I fucked up my food, but looking around the staff was furiously changing out these hot grill covers for every table in between courses. Not great.

K-POT is also BYO, which is awesome.  Bring whatever you plan on drinking cold and prepare for improper glassware.

Here are some additional pro-tips for K-POT.

K-POT is a solid value with solid food and none of the terrible shit associated with the average all you can eat buffet.  I recommend going. Keep in mind that recessions kill buffets (and steakhouses – watch out Edward’s), so who knows how long this place will be around for. I recommend going soon.

I created Nice Things because I want us to have nice things. So if you enjoyed what you read, share it with your friends.

If you’re interested in writing and have something to say, I want you to use this platform. Send a partially cogent email to NiceThingsJC@gmail.com with what you want to rant about. If you write something, I’ll give you a shirt.