Now, the second half of Beer in JC.

You know what you’re doing.

By far JC’s best beer bar since HopScotch closed down.  People didn’t value HopScotch despite their robust bottle program.  This is in part because there was absolutely nothing cool about the place, as was evident by the oars, Jimi Hendrix posters, and other goofy shit they had on the walls.  The food wasn’t particularly good, but they did have a real nice selection of whiskey.  But, if I’m being honest, Wurstbar has been getting some fucking FIRE over the past year, so I don’t even think HopScotch at its best could compete.

Much like the tensile steel that restrained King Kong, our nation’s first sweet prince, our state is currently restrained by archaic beer laws and burdensome taxation that prevents the same level of selection found across the river. Wurstbar manages to break through these shackles to find us amazing beer to consume.  This is the result of having someone who knows what the fuck they’re doing curate their selection instead of simply looking at the cost per barrel.  They CREATE demand instead of solely responding to it. 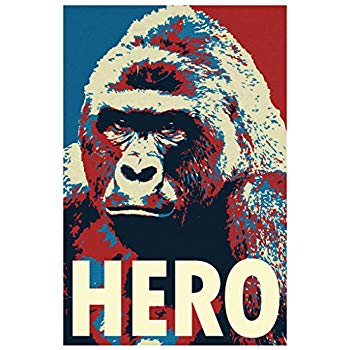 I’ve had about 400 conversations that go almost exactly like this:

Rando: “Nice Things, I  want an unpasteurized plum lambic aged on oak – where should I go”

Rando: “Actually, I want a spicy imperial stout that tastes like Tres Leches”

Rando: “What about a Belgian Dark aged in Chardonnay Barrels?”

Rando: “OK, sure, but I want a Basque cider thats HEAVY on the vanilla”

Me: “ Go to fucking Wurstbar”

Rando: “Alright, you cantankerous tit, I want a Swisher Sweet, but instead of smoking it, I wanna drink it”

Me: “You can go to hell.  And then you can go to Wurstbar because they fucking have that too.  It’s not good, but I don’t kink shame”

Additionally, their food is fucking great.  ‘Thoughtful’ is not typically a word I use to describe sausage, but that’s really the only way to describe their perfectly balanced offerings.  Almost every single sausage has elements of sweet, savory, sour, spicy, and a little bit of funk.  I fucking love this place, and I don’t care if it eventually becomes mobbed with amateur cicerones.  Go to Wurstbar.

You’re new and you long for the unknown.

Barcade is the perfect beginner beer bar because of their large high-quality draft selection and the speed of their rotation.  Before you could find Cascade at your corner beer shop, Barcade had Sang Royale on tap. Still not an easy find.  Their selection will run a bit pedestrian at times, but I’m also a complete fucking snob.  You, reader, should drink your way through their rotation and discover some new shit.  Don’t be afraid to try something that sounds weird.  Your first sip of a sour will be drastically different from your 4th.  Think about what you drink.  Swirl it around your mouth and embrace the weirdness.  You will get what you give.

Honorable mention for having NBA JAM, 4 player Pac-Man, and Marvel vs Capcom.  If I hadn’t spent my twenties fist pumping in Seaside clubs and self-Edging, this trinity would  surely have given me carpal-tunnel.

The other cohort were angry neighbors reposting the same tired “there goes the neighborhood” response, as they’ve done so many times before.  This group longs for the days of cobbled roads and keeping the house warm with immolated horse shit.  Think of Clint Eastwood’s character from Gran Torino, now make 150 of them and give them Twitter fingers.  They’re not here for fun. These mirthless blowhards are here to spend every waking second feeling every painful inch of the life that surrounds them …and they want you to join them.

These two insufferable groups were at odds.  And not one of them even asked if the beer was good.  So I’ll answer this question that was not asked.

I can’t really say if 902 is good or bad because I’ve haven’t had explored their offerings as much as other NJ beers. However, what I have had left me pretty underwhelmed.    They deliver on the style they commit to in a predictable, dispassionate, and ultimately forgettable fashion.  They are drinkable, if you’re drinking an IPA you’re getting an IPA.  If you try their Black IPA, its going to have the roasted soil and Raisinettes profile you’d expect.  The comically named No Line is too apropos to be self-deprecating.  If you encounter these cans at a beer store they are the ones you try once and then move on.  You get it.

But, the most important item worth mentioning is that 902 is cucking Jersey City.  Two of their beers P.A.T.H (stands for Pale Ale True Hoboken) and Heaven, Hell or Hoboken, have fucking Hoboken in the title which is probably not great for a self-proclaimed Jersey City brewery, which their homepage says they are.  What’s more painful is that those are their two flagship beers.  I’m not a full on Hoboken hater, but if you want me to fly a flag for my local beer it better not have another city’s name on it.   This is what is supposed to get people in the door so they can try all the really good stuff at the taphouse, even if the taphouse is only a concept at this point.  They’ve also managed to shout out New Zealand on their cans before memorializing the city they are based in. 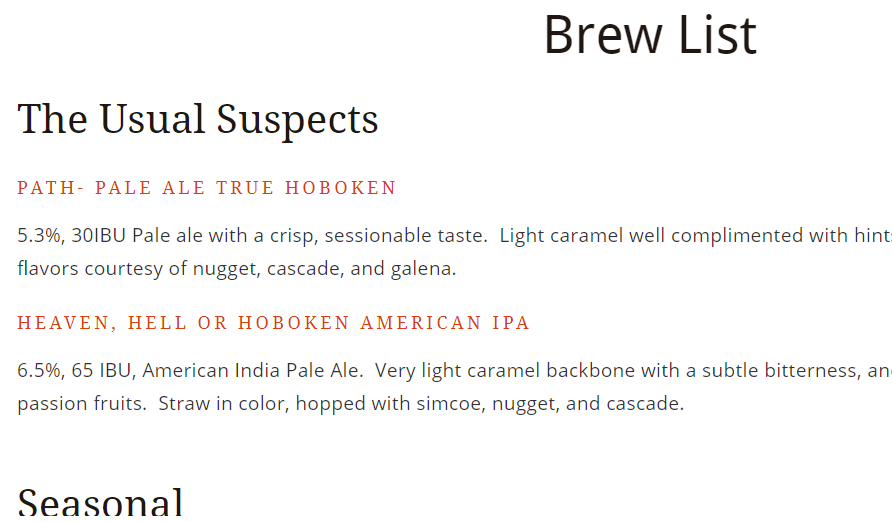 902 is a caricature of gentrification.  They’ve moved to JC presumably because its cheaper, they plan on profiting off of a rapidly gentrifying neighborhood, and brand themselves as HOBOKEN.  I’m not drinking another one of these beers, the beers that I’m already not drinking, until I get Jersey City in that fucking title.

Take us out of the friend zone you fucking boners.

Departed Soles does not suffer from this problem.  They embrace JC.   However, this doesn’t make them immune from criticism.

My gripe with DS is that they make so much weird shit that it’s hard to pinpoint what brews are thoughtfully crafted and which are a joke.  Some of their stuff tastes like a home brew, which is not a compliment and typically not something anyone ever pays for.   If you can’t get a good pale ale down then you probably don’t have any business canning a biere de garde.  They seem to get caught up in the gimmicks, like adding peeps into their beer or the rum barrel brews they had on for their 3rd anniversary.

This whole brewery lacks concentration and subtlety, which is why you’ll get beaten over the head with any additive put into their beer.  I wanna shove Adderall in their fucking mouth and watch them brew.  I’ll stand by their side and rap their knuckles with a ruler every time they reach for guava paste, or croissants, or a nest of angry hornets, or whatever weird shit they plan on throwing in these beers, until they can develop a desirable base to build off of.

You can see their potential in The Philosoraptor, what I’d consider their best and most popular beer, which has the refinement and balance that you would willingly pay for.  It’s clear these guys are having fun and being creative, but some attention to refining their core brews are needed. 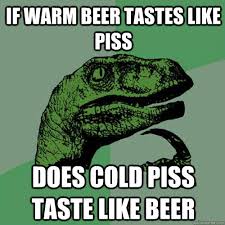 On a different note, their taphouse is a good hang and the beers are cheap, which makes up for a lot.  The dudes who run Departed Soles are super chill and not pretentious beer snobs, which is something that adds an insane amount of value to their place.  I’ve never had a bad time at Departed Soles and I’m going to keep spending my dollars there despite the short comings with the beer.

With both of these breweries it’s easy to get into a dick measuring contest with the competition at other bars and beer shops, but it’s important to remember that these are two relatively young breweries and they are both trying to make good beer.  902 is starting to take a page out of Other Half’s playbook by releasing more NEIPA’s and showcasing single hop varietals. Departed Soles is following closer to Carton, another respectable NJ brewery, by attempting creative brews that push the boundaries of your comfort zone.  And this is the place where I find hope.

Both of these breweries are trying to make good beer and are being thoughtful throughout the process.  Creativity is a bold thing to attempt when your business is on the line, so in these instances it’s important that we award the attempt. Both of them started out making hot trash and have elevated their game to a place that warrants honest criticism instead of a participation trophy.  They know what good beer tastes like and are sailing both their ships towards that north star.  They are clearly hungry to develop their styles and hone their craft.

Beer can be challenging in this area because it takes a lot of time to get this stuff down right.  Additionally, experimentation takes time because beer takes time.  Unlike a restaurant, you can’t tonight’s staff meal into tomorrows special.  If you age a beer in a rum barrel for 48 hrs its only going to taste like disappointment.

As long as these guys do not get complacent they will make more beers you crave, and create more excitement when you see their cans in your local cold case.  I plan on continuing to support these guys until they stop giving a shit.  Except for 902.  My support for them is currently blindfolded, gagged, and being broadcasted live on Al-Jazeera until our demands are met.

A few programming notes to wrap this up.

This blog isn’t possible without the feedback of all the people who read and support Nice Things.  Please continue to share your opinions and suggestions with me so that Nice Things can be a nicer thing.  Feedback, whether positive or negative, is essential to advancing whatever craft you are attempting to practice and I sincerely thank all the readers who have provided their thoughts.  All are welcome and I can certainly take what I dish out.

Second, the sole promotional component of Nice Things is you.  I don’t push or promote this blog, I don’t do sponsored content, I don’t buy followers to manipulate algorithms.  The SEO widget was an extra $9 a month on WordPress and even that was a bridge too far.  All this goes to say that if you like what you reading here you should like or share the blog with your friends.  You are the only reason anyone knows about this…well, and me obsessively following anyone who takes a picture of a JC meal on Instagram.

Last, If you’re feeling what I’m saying, I want you to be part of this.  If you’ve got an idea for a story, if you’ve heard about some insane shit that you’d like to speak on under the cover of anonymity, or if you just feel so passionate about something that you want to devote 1,000 words to it, I want to give you access to this platform.  So, I’m opening up Nice Things to guest contributors.  If you’re interested in writing some stuff, send it to NiceThingsJC@gmail.com and I’ll take a look at it.

I really do believe that things like Nice Things have the power to influence the decision making process and raise the bar that’s been set in JC.

I created Nice Things because I want us to have nice things. So if you enjoyed what you read, share it with your friends.  You can follow me on Instagram @NiceThingsJC